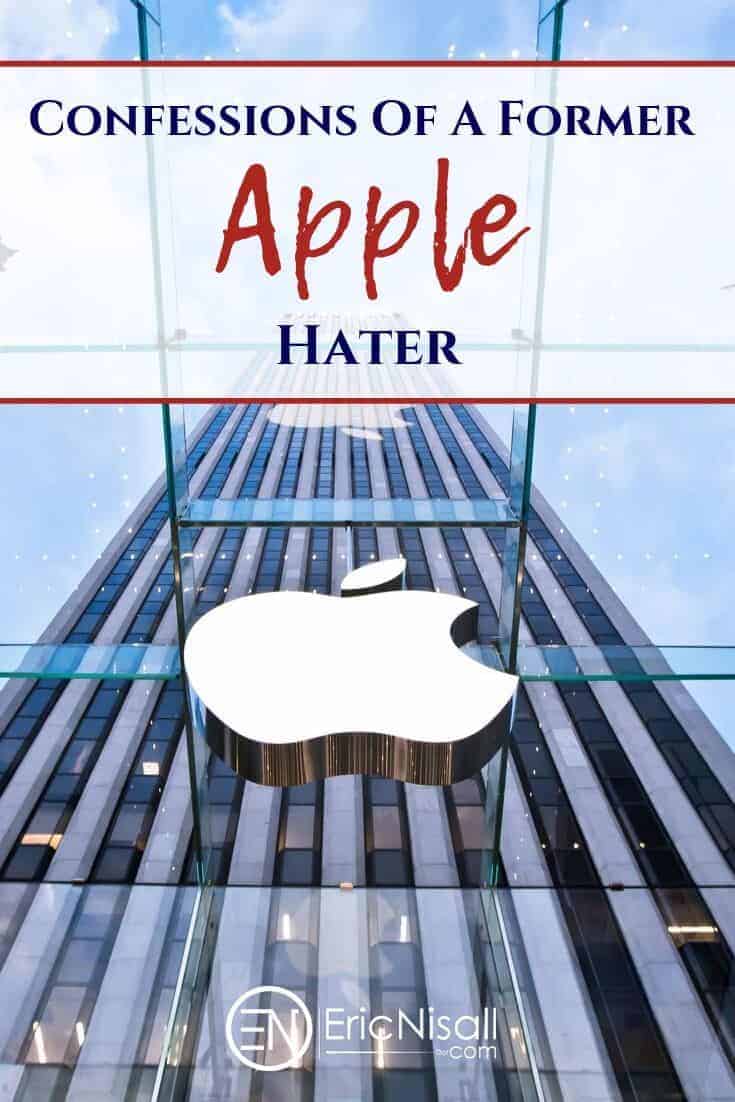 The fans were rabid.

You better not speak negatively about their Apple product.

You better not speak ill of the company itself.

If you do, you better watch out.

They’d all come after you en masse!

And in their eyes, Apple can do no wrong.

Even if it was definitively proven to be the case.

I couldn’t stand any of it:

And then it all changed.

I am not an Apple fanboy.

I was, admittedly, one of those folks that bashed the company for making so many of its products too similar in nature and functionality for my preferences.

Seriously, there were like 100 different iPods on the market at the same time.

But, somewhere along the way, I came to realize something and eventually caved a little, buying an iPad when the 3rd generation was released, although I didn’t camp out at the store to get it.

In fact, I got an iPhone as well.

I know my fanboy comment seems a little far-fetched so far, but keep reading and you’ll understand everything soon enough.

“I Hate Everything Apple”

From the very first time I saw an Apple computer, I knew I would never like them.

For some strange reason, I had a total hatred for the simple reason of the mouse with no separate buttons.

I mean come on, how can you have a mouse that doesn’t have distinct left and right-click abilities!?

And where the hell was the scroll wheels or thumb buttons, how would you easily navigate your web browser or productivity programs efficiently?

Besides that, I had absolutely no intentions of ever getting into graphic design or any other area that Apple was designed to be superior for.

Besides, they cost enough to buy two really good quality PCs, and even more if you sacrificed a little quality and some features.

When the iPods came out, it was a similar story for me.

Why on earth would I need something that would store thousands of songs giving me hours upon hours of musical pleasure?

I have had stereos in my homes even before the advent of these things.

I haven’t had commutes that would possibly have necessitated owning a product such as this.

I never went on runs or did any other activities which would require me to have a personal music player.

And again, there was the issue of price.

Microsoft had their own version as did several other manufacturers at a lower cost to me if I ever decided to get one (no, I never did, so no Zune jokes).

My attitude towards the iPhone was no different from the previous products.

Way too much money compared to the alternatives which were supposed to be just as good or even better (so-called iPhone killers my ass!).

[Cool points for those of you who know this line!]

Seems like I was totally against the company, huh?

So what happened that made me run out on the third day the New iPad was available and pick one up?

I stopped the blind hating and opened my eyes and mind, that’s what.

I gave it a real chance and shopped the right way.

In the past, I allowed the Apple name to dissuade me, which is funny since most of the time a brand name is supposed to persuade consumers.

In the past I allowed my dislike of a particular product to affect my judgment of all others.

In the past I allowed my feelings toward a douchey, cocky CEO with an affinity for turtlenecks to affect how I viewed his company’s products (who’s the douche now?).

It really is amazing what can happen when you try something different, particularly when it is the right way.

My iPad Is The Shit!

Unlike most of the products that run on Google’s Android operating system, whether they are phones or tablets, this thing kicks all of their asses.

It’s thinner, more powerful, more expandable since apps are designed first for the Apple App Store before the Google Play Market, and the battery is almost never-ending (well, not really but it does last a long, long time).

Perhaps the most important thing that turned me to the “dark side” is the logistics of updating and upgrading.

Since only one company builds both the hardware and software, Apple products are universally updated whenever one comes out, assuming it is still being supported.

Any carrier that has an iPhone in its product line-up gets the exact same version as the others.

Compare that to the Android crap, where there are no less than five different handset manufacturers, and each carrier gets a different version of a particular phone if at all (some manufacturers will not make a variant for some carriers while doing so for others).

If an update from Google is made available, it first has to go to the manufacturers to be customized for each of their particular products before even getting to the carrier and that’s the part that pisses me off since it’s not even known from the beginning if a certain product will be given an update as is the case of what happened with Ice Cream Sandwich (Android version 4).

If you thought to yourself that I was one who was left out in the cold when the ICS update when live, you are correct, and that was on a phone which most experts thought would handle it nicely.

Well, there are also my issues with Google’s business practices as it relates to small businesses but you can read about that another time.

I finally decided to give Apple a chance, and when I did, I was more than pleasantly surprised.

You could probably say I was knocked on my ass when I finally saw what I was missing out on.

In fact, I am so impressed with how much better than Android the iOS operating system and the iPad hardware is compared to Android and its many handset providers, I am going to be trading in my Android for an iPhone.

It’s not over yet

Hold on now, I’m not becoming a fanboy or anything just yet.

I still have issues with the iPad and iPhone interfaces compared to the Android.

I hate having a bunch of icons on the screen rather than being able to have widgets that are useful and informative without even launching an app.

I also love having seven different screens available for displaying the widgets and icons so the display isn’t so crowded.

I will miss the variety of options available to choose from.

Granted, I can always switch over to a Windows device, but my experience with those products wasn’t the most positive when the first one came out in the form of the HTC Hero a few years ago.

Bottom line–Apple may just have won me over, but only time will reveal how much of a fan I do become.