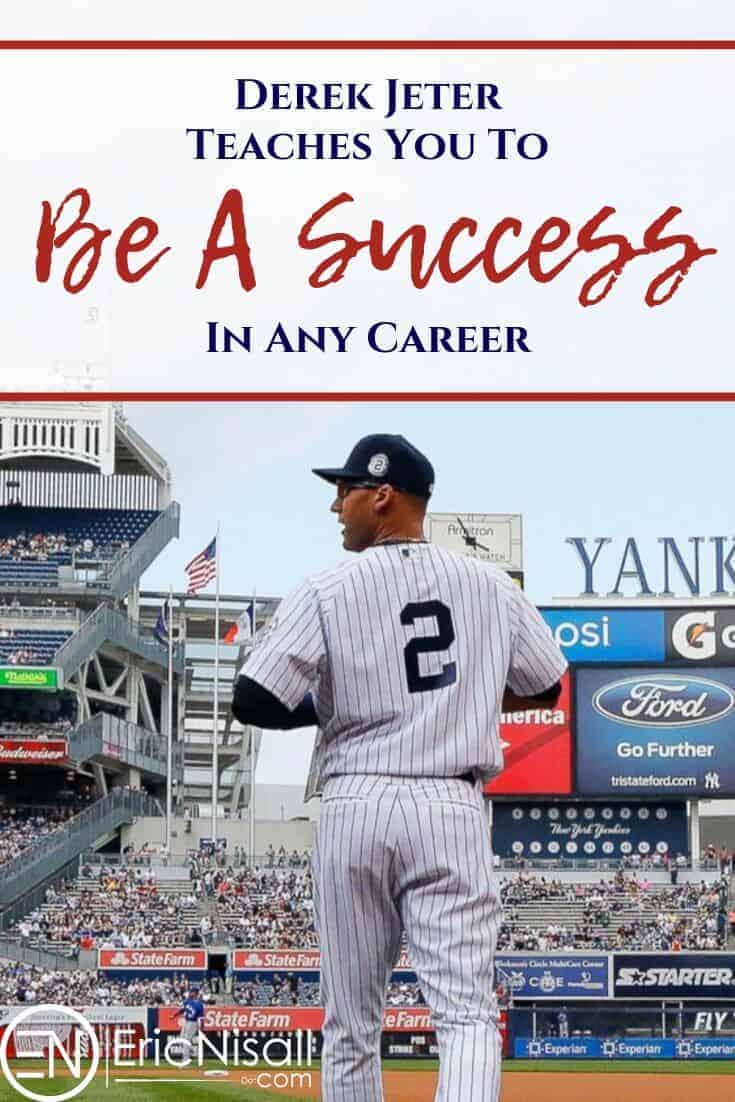 Derek Jeter is a megastar.

He’s married to a supermodel.

He’s a part-owner of the Miami Marlins.

I can go on and on listing all of his achievements.

So what the hell does he have in common with the rest of us!?

Quite a bit actually.

This is a once in a generation athlete.

One who transcends the sport he plays, and sports in general like no other.

The things he does on the baseball diamond.

The things he does off the field.

Particularly the things he doesn’t do make him a leader.

But he also represents the majority of us.

He doesn’t possess the most talent or the highest level of any singular skill.

He’s a man who worked his ass off to get where he is; doing a job well and maintaining that level of success in his chosen field.

Anyone looking to become more successful in any profession can learn a few things from Derek Jeter and would be wise to emulate these traits:

Even though he was the sixth overall pick in the 1992 Major League Baseball draft, he was still stuck in the minors for almost 4 years before becoming the everyday shortstop for the Yankees in 1996.

In his first season in the minor leagues, he batted only .202, while committing 56 errors in only 126 games in his second season.

Since then, he went on to become the Yankees Captain, 5-time World Series winner, a Rookie of the Year, multiple-time All-Star, Gold Glove, and Silver Slugger recipient, All-Star Game MVP, World Series MVP.

Even in later years, when it was suggested that his game was slipping and wasn’t up to his usual standard, he went back and rededicated himself to improving.

“Potential” and pedigree can only account for so much.

Eventually, your performance has to speak for you.

Don’t let roadblocks get in your way–overcome them.

It may take some time, and almost certainly will not happen overnight, but patience and persistence will be key in helping you to overcome what is in your way.

It’s ok to get discouraged, but you cannot give up without giving it everything you have.

And, just because you have achieved any level of success, there are always that can be improved; there is no such thing as reaching perfection.

These two go hand in hand since you can’t be professional about your job if you aren’t proud to be doing it.

Derek Jeter brings both to the table.

As the team Captain, and as a fan of the Yankees, he is always stating how it is an honor and privilege to get the chance to put on the uniform every day.

Additionally, everything to him is about the company.

He rarely in interviews uses “I” or “me”, but rather speaks of “us” and “we” even when answering questions directed toward him personally, signifying the concept of there being no “I” in team.

And, even for someone of his celebrity status, it is rare to hear of anything he does in the media.

For his part, he tries to keep a low profile and cause any distraction from the team and what it is trying to accomplish.

Take pride in what you do, and who you work for.

Take yourself out of the equation; make it about the product/service and the company not about a single individual even if it is just you doing it all.

Understand that no matter who the person is, no one is bigger than the company as a whole.

In a game against the Boston Red Sox in July of 2004, Jeter dove headfirst into the stands while making a catch.

This was an “insignificant” game in relation to an entire season and how far along the season had progressed to that point, but some people just don’t see anything as insignificant.

In fact, not only did Jeter dive into the stands, the manner in which he gave up his body to make a play was something most people wouldn’t do in any circumstances, much less than in the course of a “normal” day.

On July 10, 2011, he recorded his 3,000th hit in the 3rd inning; many people would have called it a day and took the rest of the game off to bask in the glory, but he not only finished the game but ended with 5 hits in 5 at-bats and driving in the winning run.

As a matter of fact, he also played the following day and led off that game with a hit as well.

Don’t hold anything back.

You can’t always play it safe; even if there doesn’t appear to be anything on the line you need to give all you can.

Even if you accomplish a specific goal, the day isn’t over, and tomorrow will bring a new set of challenges and goals to reach.

Set your sights on those next goals, and begin working toward them right away–there’s no sense in delaying it.

Even though at first glance, you may not have put these two subjects together, you have to admit that there is a certain correlation between captaining perhaps the greatest sports franchise on the planet and managing a career.

In fact, sometimes it’s better to look beyond the things people do and appreciate them for how they act.

There are times when certain people rise above just being athletes and can teach us a thing or three about improving the way we view our own lives and careers.

Personally, I’ve outgrown the idea of placing people who can run, throw, hit, etc. on a pedestal.

Now, I consider the person they are more so than the talent they possess.

Have you ever look at someone in a way other than what they are most known for? Do you just dismiss someone as “just another xxxx” when it comes to this stance? Who is someone along the lines of a Derek Jeter can you say something like this about?