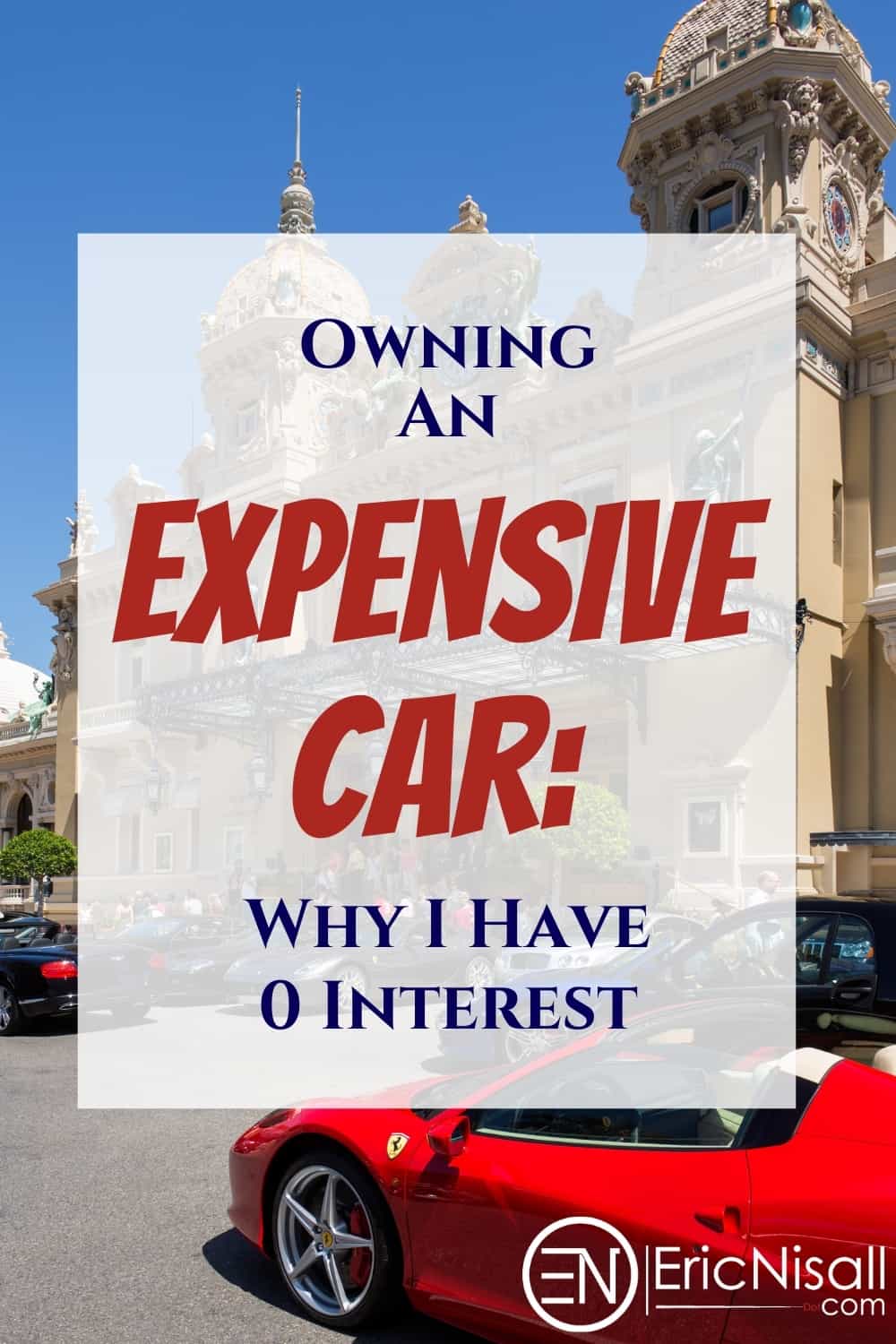 I’m not a car guy, never have been.

Honestly, I don’t even know what an “expensive car” means in that world.

My father was never a car guy.

Most of my friends weren’t either.

My first two cars combined only cost about $2,000–probably the exact opposite of owning an expensive car.

Sure, at one point I went a little overboard with a car, but the car itself wasn’t expensive.

Truth be told, I really don’t care about, nor equate quality to the price tag of a vehicle.

The idea that cars supposedly represent a person’s social or financial “status” is just a joke to me.

Too often I see people with a crazy expensive car with absolutely no class or decorum whatsoever.

Or having to pay so much for the car that they can’t afford to insure it.

So that right there tells me that the idea of cars as status symbols is a completely flawed theory.

Aside from that, I just have issues with…

This is quite simple: I don’t want to be bothered with all of the hassles of owning an expensive car.

I don’t want to have to carry a towel to wipe it down every time I drive it.

I don’t want to have to hassle with going to a specialized shop for routine maintenance.

I don’t want to become one of “those” people who look at their car like it is one of (or even better than) their children.

I don’t want to have to deal with any of that stuff.

It’s not that I don’t want to take care of my possessions, that’s not it at all…

My issue is that I don’t want to spend the amount of time of money that is required to endure that such a costly possession is well-maintained and cared for.

It Costs More To Insure An Expensive Car

For starters, an expensive car is usually equally expensive to repair/replace.

Also, they are highly sought after by thieves due to the high cost of the individual parts.

Part of that issue is also how/where you store your car–a garaged vehicle is considered safer than a street-parked one.

Unfortunately, I don’t have a garage in which to keep my car parked, which makes me susceptible to this last factor.

There are also driver factors that raise the insurance rates…

So let’s not pretend that you aren’t going to be opening up your fancy new luxury or sports vehicle to see just how far it can be pushed?

The bottom line is that I don’t want to pay more for my auto insurance than I do for my mortgage payment!

I’m probably not alone when it comes to being the victim of damage to a car that was truly not my own fault or avoidable.

Debris on the road can be kicked up by other cars which has the potential to scratch my own car, cause dents, or even crack the windshield.

Trucks that are by law supposed to cover and secure the crap they are transporting often do not, and that stuff flies all over the place.

Idiot people who shove shopping carts across parking lots recklessly can scratch and dent cars and not think twice about it.

I’ve seen and experienced these things with my own two eyes, and it’s very frustrating to have to deal with them after the fact.

The frustration level probably increases significantly when you own an expensive car and the repair costs are higher.

Sure, in parking lots you try to park strategically:

I definitely won’t recommend that third option, however.

Even taking precautions won’t guarantee your car will remain safe from dumb or careless people.

Or even cheap cities that refuse to fix potholes or torn up roads for that matter!

What really blows my mind is seeing someone deliver for Instacart or the local pizzeria in an expensive car and wondering how much damage gets done.

Going back to the parking lots, at one time I came out of a mall only to find that my front passenger-side door was dented, yet no one was around.

No note, no witnesses, and of course no security cameras to review in an effort to catch a glimpse of what had happened.

I’m the type of person who likes to park far away from my destination, knowing that most people are too lazy to do so themselves.

I also like to park against the curb so the possibility of a moron opening their door into mine is limited to one potential side.

Sadly, people always find ways to be stupid and careless:

All of these things can easily be avoided but aren’t because people don’t consider anyone else but themselves.

Oddly enough, a fair amount of this idiocy comes from people who are driving in an expensive car as if they don’t care.

When I lived in New York, it was the snow that made driving difficult at times, and the road salt which was the enemy of metal parts and a car’s finish.

When I moved to south Florida, it became the thunderstorms and the damage from hurricane season.

In destructive weather, anything has the potential to damage a car.

I’ve seen trees and light poles knocked down, resting on top of cars.

I’ve even seen street and store signs pulled off of structures and thrown through windows, landing inside of cars.

Hail can be large enough to crack windows.

Even if I did have a garage within which to store a car during these times, it’s not always guaranteed to be safe.

In heavy rain, the streets can flood so quickly and high that you can’t see what you’re driving into.

Under those conditions, you could easily drive into a ditch or large pothole.

I’ve had a cracked rim on my 2018 Honda Accord that cost me $750 to replace so imagine the kind of cost damage like that and worse would cost on any number of status brands.

It makes my head hurt just thinking about that number lol.

Imagine what kind of numbers we’d be talking about having to need in your emergency preparedness plan to cover damage to a Mercedes or Masaratti!?

Kids Playing In The Street

This is something I know about firsthand because I was one of the people I’ve grown to bitch and moan about.

Growing up, we’d play football and basketball, toss a baseball and ride bikes or skateboards in the streets right next to parked cars.

I’ve crashed a bike, skateboard, and even my own body into a few.

Now that I have my own car and know how much time and money it would cost to repair it from damage caused by any of those activities, I understand why we got yelled at so often as kids.

It still doesn’t change my mind, however.

Maybe I’m a hypocrite or out of touch now, but I still don’t want any of the neighborhood kids doing kickflips on their boards, or throwing a baseball across the parking lot when my car is only a few feet away.

Perhaps if I had more money than I knew what to do with, and I could own a fleet of cars if I so desired, I would reconsider.

It’s doubtful that would ever be the case, though, as I could think of numerous other things to do with that kind of money.

To be honest, I don’t even like driving to begin with.

Like, despise would be a better word to describe my feelings toward it.

Who knows what can happen in the future, but even though I tend to stick to my convictions, I will never say never.

But again, it’s a personal choice.

For me, I just don’t care enough about cars and what they “say about me” to spend the money.

If you do, and you can afford it, great, I’m happy you have something that brings you joy!

There it is, you now know my reasonings for not having an interest in owning an expensive car.

I don’t want to pay for it or the higher insurance and maintenance costs.

I don’t want to worry about others messing it up.

I especially don’t want to have to deal with the weather in South Florida and what it can do to my beautiful expensive car.

Hey, you can agree or disagree, but this is my money.

You are more than welcome to spend your own however you choose.

Some people get wrapped up in the pitch by marketing agencies making them think that owning an expensive car will make them cool or special.

Some people want to be viewed in a certain way.

Some people are used to living a certain “lifestyle”.

Some people just have so much money they don’t know what else to do with it.

This is just my opinion on owning an expensive car and not a judgment on any of those people!

What are your thoughts on owning an expensive car? Do you care more about your “image” or your money? In your experience, has it been worth the money?