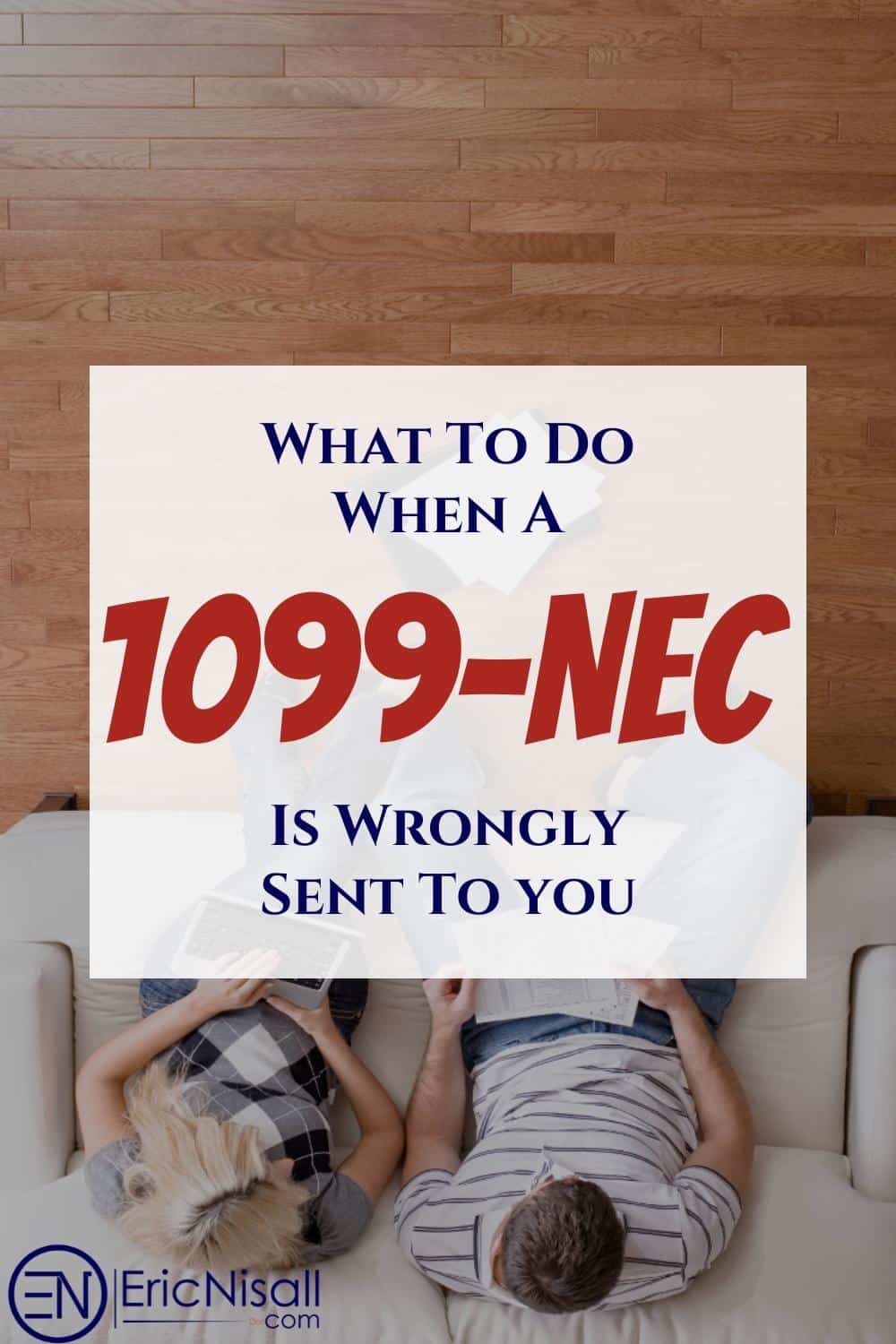 This is a follow-up to my previous article about sending Form 1099-NEC when they aren’t required and how it can be costing you money and give your partners unnecessary work. This is the flip-side for those of you who are the ones on the receiving end.

Also, for reference, a new old form is coming in 2020 called the 1099-NEC. For all intents and purposes, this is the form for paying independent contractors and freelancers going forward. The rules for the 1099-NEC are the same as for the 1099-MISC and the IRS still uses the “MISC” in many of its instructions.

One second you’re walking to the mailbox, not a care in the world.

The next second, you’re filled with dread.

You hold a letter from the IRS, your hand trembling.

Scared as you may be, you open it, hoping it’s not what you think.

Experienced freelancers will know some of this already.

If you are relatively new to freelancing, this may be totally new.

In either case, you’ll want to pay attention.

I can guarantee that if you haven’t personally, you know someone who has dealt with it.

And because I’m going to put your mind at ease about it.

So what is “it” already?

And it can be a pain in the ass, not to mention scary as shit if you aren’t prepared.

Tax Forms You Need To Know About

I like to be thorough and not take anyone’s level of knowledge for granted, so bear with me for a second while I explain this to anyone who isn’t very familiar with the concept.

Hell, you self-taught experts may surprise yourselves with how much you didn’t know so you may want to read this all the way through too!

As a business owner/contractor, you aren’t treated the same as an employee.

You don’t get a regular paycheck with taxes taken out.

You don’t get a neat little W-2 at the beginning of the year summarizing your earnings and tax withholding in a single, neat document.

Instead, you are responsible for calculating and paying your own estimated taxes, getting a form 1099-NEC instead (if you earn $600 or more from any single partner for the year and paid via cash, check, bank transfer, or money-sharing app).

This can be loosely described as the non-employee version of a W-2, except it only shows income (no tax info since you do that independently of the people you work for).

You probably don’t even get a check or direct deposit at all.

Most likely you accept credit cards in your business.

Or get paid via a 3rd party payment processor such as PayPal.

This form is quite different than the other two which were mentioned earlier.

A 1099-K is a form that payment processors send out to people who reach certain minimums in terms of transaction volume and the total value of receipts (200 transactions and $20,000).

So that’s a basic overview of the differences between all of the tax forms which you need to know about.

This is where things appear to get complicated, even though they aren’t, and shouldn’t.

And it’s not your fault whatsoever!

Every employer is required to send a copy of the W-2 to the IRS to match up with their income tax return.

It’s how the IRS knows that people (for the most part) are reporting what they earned and can’t cheat (although they always find a way).

The same thing happens any time a business or individual pays a non-employee more than $600…they send in a 1099-NEC to the IRS.

And if you qualify for a 1099-K–having in excess of 200 transactions AND more than $20k in gross billings running through a third-party payment processor like PayPal, Stripe, etc–a copy of that also goes to the IRS on your behalf.

If you get both a 1099-NEC and a 1099-K, doesn’t that mean much more money is being reported than is actually being earned?

That’s where you’re getting screwed over in a sense.

And why is that?

Here are the reasons for that:

This pretty much means that if a business pays a contractor via non-cash methods, they DO NOT file a 1099-NEC for those people.

It doesn’t say “Well, you can do it on either and if you’ve been filing 1099-NEC forms all along then you don’t have to stop now”.

It says plain and clear “NOT SUBJECT TO REPORTING” which means DON’T DO IT.

Heck, if you go and look at the other side of the equations, this is what the 1099-K instructions say:

Again, any payments by a payment settlement entity (ie: PayPal) do not get reported on a Form 1099-NEC.

But, for one reason or another, many companies, their (hack) accountants, or the companies they use to run payroll (since this is really a payroll issue at heart) don’t care.

In the end, what can, and usually does, happen is the IRS cannot match your reported income with the figures reported on your behalf because of this double income reporting.

The part that makes this suck more is that the IRS generally is 2 years behind on doing its matching thing.

So, in essence, you may have to wait around for up to 24+ months to find out if you will even be receiving that dreaded envelope with the IRS logo on it.

What To Do When You Get An IRS Notice

Now this is where you are going to change your tune about the IRS (Maybe. Possibly. Probably not.)

When you get a notice stating that the income you reported on your tax return doesn’t match the records the IRS received under your tax id number do not panic!

This is an automated notice which is just stating facts, nothing more.

It isn’t an indictment.

It’s not even a threat.

No one’s coming knocking at your door and no one is sending you to collections or even jail. (You need to start learning how to be more discerning about what you believe on the internet!)

It’s basically a notification of the difference and a chance for you to explain what may have happened to cause this discrepancy.

There is nothing to worry about!

What you need to do is keep a level head so you can deal with the issue quickly and efficiently.

How do you do that?

If you can show that your numbers are factual ones, then it shouldn’t be very hard to get things like this squared away more easily.

Just don’t freak out at the slightest sign of trouble or even the words Internal Revenue Service.

Two things will help you through this:

If you approach this thing from a calm and logical place, you’ll make it through quicker and less stressed than if you didn’t!

There is something that you can do to try to avoid this ordeal right away.

Rather than waiting to see if you’ll be put in this situation, you can be proactive.

Reach out to the companies you work with.

Let them know that since you are getting paid via PayPal (or via your merchant account) they DO NOT BELONG FILING A 1099-NEC on your behalf.

If they say that “we have to” for any reason, refer them to my article about when a 1099-NEC should be issued.

Then, offer to give them my information so they can get in touch with me and I’ll tell them exactly what they “have to do” and “don’t belong” doing.

If all else fails, you can always contact the IRS and file a complaint against any business which refuses to abide by the rules and purposefully goes against what the instructions clearly state.

It sucks to be put in a situation like this.

I’ve already heard from several people who have and the good thing is, at least a few businesses have been willing to “consider” changing the way they operate in terms of issuing 1099-NEC forms to freelancers when they shouldn’t be doing so.

All you can do is report what you know to be accurate information and only pay your fair share.

Then let everything else unfold as it will and deal with it when it comes up.

At least you’ll be prepared in the event you do get that dreaded IRS notice!

Sometimes the 1099-NEC you receive isn’t incorrect due to the method of payment or the form of business you operate.

There is another instance that comes up quite often.

It’s really easy to do, too.

All it takes is getting someone’s name and address.

An identity thief will create a fake 1099-NEC with a real company’s name and address, but with a false email or phone number in the sender section.

Then they mail it out to unsuspecting taxpayers who freak out when they receive it.

The taxpayer then calls the number and gives their full information to “verify” that it’s them, then…

One way of protecting yourself from this form of identity theft is to check the info on the form.

Is your social security number correct?

Is your legal name in the payee field or is it a “nickname”–a would-be identity thief could get that wrong which would be a clear sign of a scam?

Verify the email and the phone number that is listed in the sender section against public records or on the “company” website directly.

Also, be sure to read through my article on identity theft protection to be aware of other kinds of scams and schemes; I also cover many ways to keep your information secure.

Have you ever received a 1099-NEC when it wasn’t supposed to be sent to you? How did you react? What did you do to resolve the problem? Share your experiences so others know that it’s not just them and to give them hope that it can be rectified 🙂