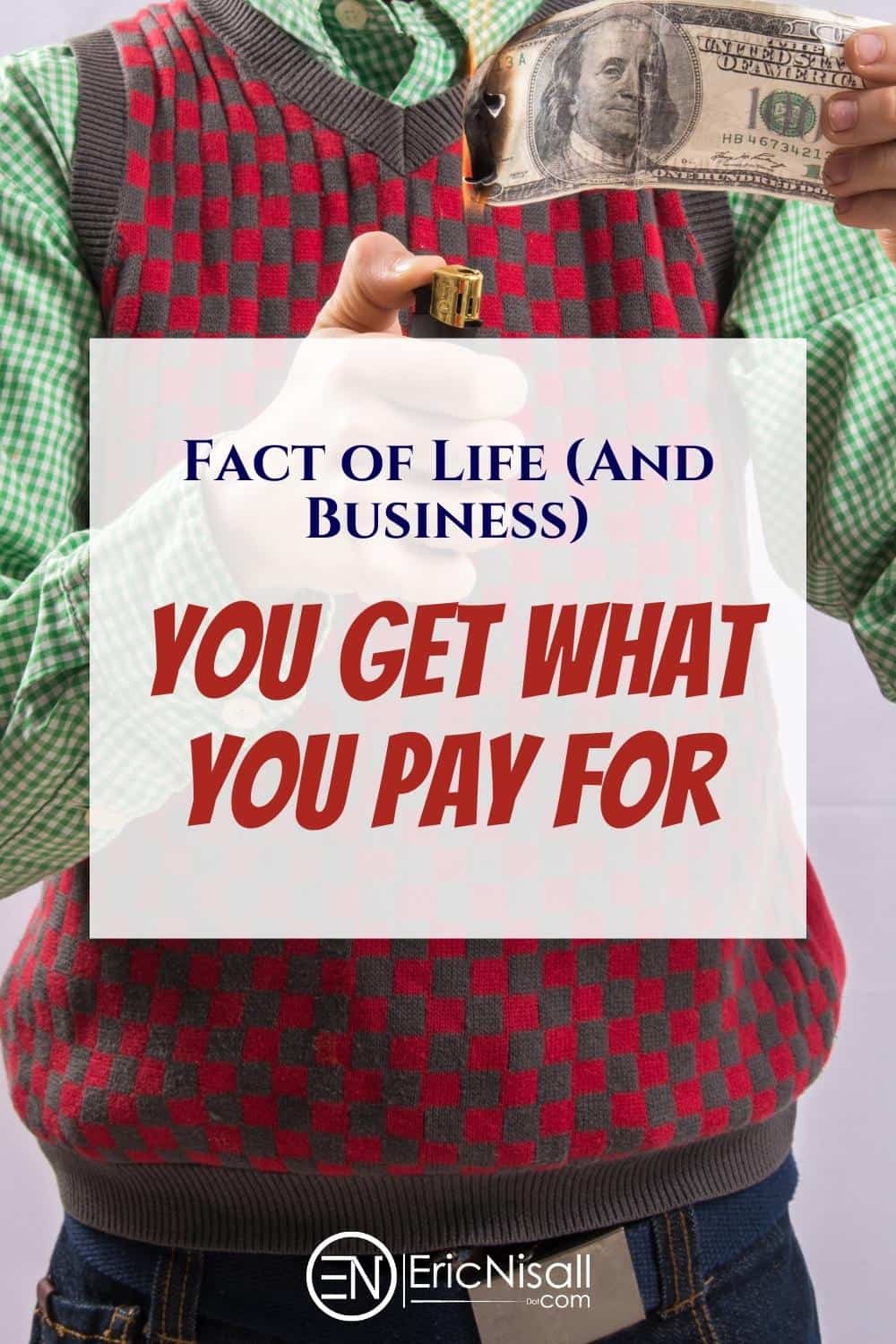 The title says it all.

No matter how you try to justify or spin it.

No matter how much you argue.

No matter how much you hate it.

No matter what products or services you are talking about.

No matter if it’s in business or in your personal life.

You get what you pay for.

You can try to save with DIY projects but sometimes it just makes more sense to outsource and hire an expert in terms of what you get for the money.

And if you are the type to only use free services, you shouldn’t expect much at all in terms of assistance or troubleshooting.

Have you ever tried getting help from Google on any issue?

Yeah, me too…help is unreliable at best and non-existent at worst.

But let’s take a look at some more specific examples:

Cutting Costs In The Office

I know a couple of guys who run a CPA firm.

Not a big place, just the two of them and a secretary.

About a year ago, they started to lose some clients; some were due to death while others due to their businesses going under in the poor economy.

Logically, the first thing they did was discuss cutting back on costs, like using generic ink and toner, canceling the bottled water service, and switching to a new VoIP phone service.

You can get away with going the discount route with some things.

But the one thing you NEVER do is cheap out on what directly affects your output, which in this case is tax preparation software.

The boys decided that they would make the switch from the leading (albeit most expensive) tax package to a fairly new name in the game with much less experience and a much smaller price tag.

Fast forward to the next tax season, and well what do you know?

The new program didn’t convert all of the previous data properly, and for their bigger clients, it didn’t provide the necessary tools they needed.

As far as the customer service, it was a breeze to get through to someone–most likely because they didn’t have many customers to service–although the expertise of those agents wasn’t close to that of the more expensive company they ran away from.

I heard that and literally had to bite my tongue so I wouldn’t laugh at them.

I felt like asking what they could have possibly been thinking when making that switch.

The last I heard, they are in the process of making another switch up to a pricier program, but not at the same level as they were originally at.

My first one wasn’t a cool or even an expensive car.

Nope, it was a 1986 burgundy Pontiac Sunbird with an oxidized hood and roof.

Well, I purchased the car in 1994, making it approximately 9 years old at the time, and it was supposedly cared for by a mechanic acquaintance of the family.

I was assured that aside from the physical appearance (which he couldn’t control very much), the car was in perfect health.

Now I can’t remember how many miles were on the wreck, but it wasn’t a really high number for the age, and it only cost me $1,100 so I had my first car.

The details are a bit fuzzy at this point, but I do recall having to drive out to Brooklyn from Staten Island a few times for issues such as the timing belt needing to be tightened or outright replaced at one point, but nothing too serious.

Disclaimer: to me “nothing too serious” meant that the timing belt would squeal a bit and the speaker box would rattle the trunk went blasted.

That was until I tried driving it to Buffalo and back in my first year of college.

When I tell you that I could have run faster than the car was going uphill, it is no exaggeration!

The car had no pick-up, no power, and–I kid you not–in the mountains it felt like we were more likely to slide backward than to push forward.

To finish off the story, the car died on me going down a hill!

You would think I learned my lesson with cheap cars after that, but unfortunately, that wasn’t entirely the case…

The car I purchased to replace that piece of junk, wasn’t much better, and why would it be

Realistically it couldn’t be all that big of an improvement if a college student was purchasing it almost immediately after his first car suddenly died.

But, I was able to get a 1991 Geo Storm for a reasonably fair price (or so I remember).

The problem with this car wasn’t so much the engine as it was something completely different and ridiculous.

Back up in Buffalo for the 2nd year of my college career, the Storm was great, or so I thought.

That was before the winters and the freezing temperatures.

So, what went wrong this time?

You may never believe this, but the door handles would freeze and snap out of place!

Yes, essentially it was like a shoulder dislocating and needing to be popped back in place, except we didn’t have time to wait as we would be freezing, so it was off to the back so one of us could climb through the hatchback and open the doors from the inside!

At least the Storm was able to get me home, back to school, and home again without dying.

No, instead I lost that one when I lent it to my brother and he crashed it!

The Job Ads With Lowball Payments

This one isn’t just for businesses but for anyone who needs to outsource tasks.

You know the ads I’m talking about on craigslist and the crappy local newspapers.

The ones seeking someone to answer phones, file, take dictation, clean the office, get the dry cleaning, or drive the boss around (well maybe that last one was a stretch).

Then when you get to the compensation part, it’s for like $8 an hour, or just over what minimum wage is in that area.

I don’t know who comes up with these things, but I swear it’s like they think they are the ones who get the short end of the deal.

Here’s how it sounds to me:

All we wanted to do was to pay someone a garbage hourly fee to do everything that no one else wanted to do around here, and give it their all, with a smile on their face and bells on each and every day.  We can’t imagine why they only lasted a few days and seemed so pissed while they were here.

The same thing goes for the people who don’t want to pay a professional to cut their grass, trim the trees, wash the car, etc.

If you go to a neighborhood kid and offer him/her a nominal price to do the job (and they know, believe me they know or their parents will step in) what on Earth would make you think that they would even care enough to do a complete and exceptional job?

It’s not like they’re trying to start a business doing it, and they know exactly how much effort should be put incommensurate with the pay.

Plus, kids don’t have the longest attention spans these days (then again, neither do many adults for that matter).

You Use Free Stuff And Still Complain

You know who you are.

You refuse to spend money if there’s a free option available.

You exclusively use open source programs such as Google Drive, have free email accounts like Gmail, AOL, Hotmail, Yahoo, etc., and host your site or blog for free on WordPress or Blogger.

Yet you always find something to complain about.

Or if something really isn’t right and you can’t find a support number you bitch even louder.

When you get things for free, expect to make some concessions!

You can’t have your cake and eat it too–there’s no fee for things because they may not have customer service staff or an on-site support team, or maybe it’s made up of volunteers who simply can’t get to you, “Mr./Mrs./Ms. Important Big Shot In Your Own Mind”, right away.

Trust me, I’ve been there too and I learned my lesson the hard way at times–dust off the wallet, pry it open, and spend a little money.

Look, it’s all well and good to try to find the best deal you can, but there comes a time when you have to realize that it’s not always in your best interest to be cheap and cut every corner you possible can to save a buck or two.

Sure everyone likes to get a bargain, but it shouldn’t come at the expense of quality, nor should you be foolish enough to think that

If you are that foolish I have some bad news for you:

In Life (And In Business) You Get What You Pay For!

If you’re into saving money, why not check out Rakuten where you get a rebate on many of the purchases you make, or Groupon where you can get significant discounts on services you want to use.

Have you experienced this truism either in your personal life or business? Do you believe it to be true or something that’s just another wannabe quotable saying?