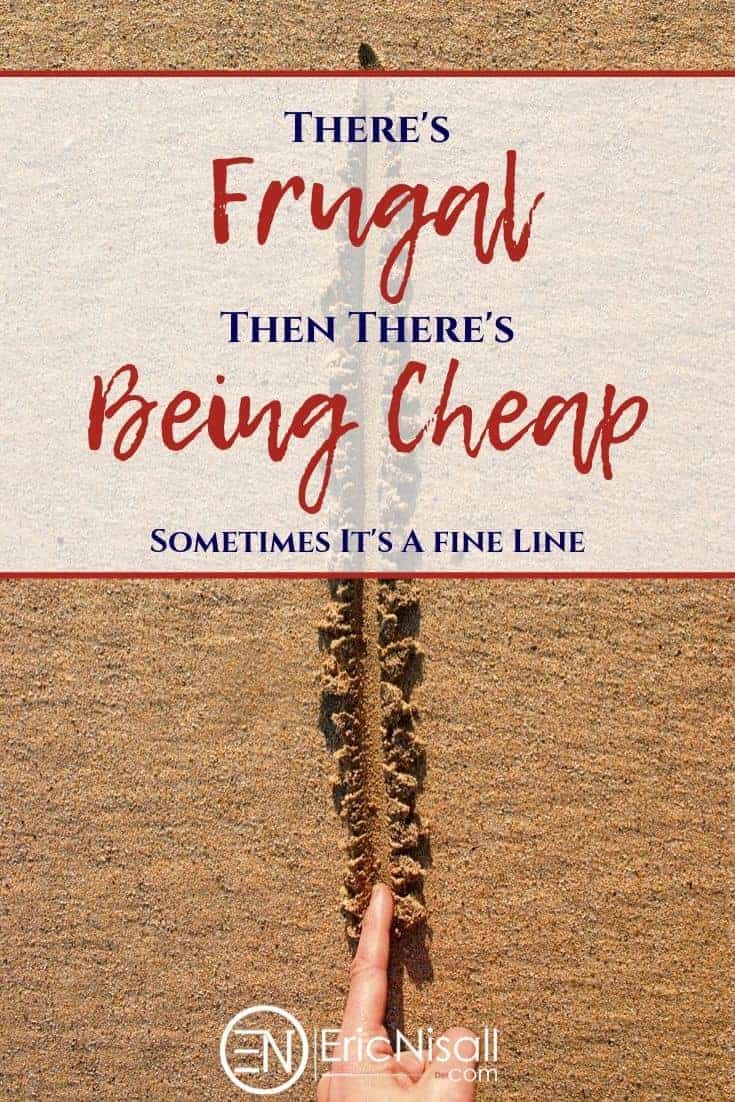 Disclaimer: everything in the article is aimed at people who have the means. This is not meant to put a negative light on people in poverty or struggling financially. It’s actually a response to some of the most commonly used talking points of frugal commentary. Please keep this in mind as you read on!

As a financial professional, it’s my responsibility to be able to help people come up with ways to save money, whether it be on their taxes or on day-to-day expenses.

As someone who has financial responsibilities of his own, I read a lot on the subject for my own benefit as well.

And even though I don’t view myself as being frugal I do read quite a bit on the subject.

What I have found in my research sometimes shocks me.

The extent that some people go to in order to save money, even in very small increments, just blows my mind.

I have no problem with:

But some of the people out there absolutely refuse anything that isn’t free!

This isn’t about choosing water rather than soda or alcohol at a restaurant.

This isn’t about alternative options to a gym membership.

This isn’t about DIY projects.

It’s really not about the benefits or drawbacks (depending on whose view it is) of living a frugal lifestyle.

This is simply an observatory piece about the lengths some people will go to save a buck.

I will say this, however, I don’t believe that building wealth can be achieved just by scrimping alone–you need to earn more while saving those additional earnings.

So where exactly do I see this transition from frugality to cheapness occurring?

Let’s be honest–these types of things aren’t really a tremendous strain on the wallet (and if they are, you may want to think about how you spend your money).

Paper goods, glassware, storage, etc. can be had at relatively low prices particularly if you aren’t interested in high-end products.

But, it is still an expense that some people would rather not have to deal with.

Many restaurants provide you with a great alternative to purchasing expensive food storage containers, and you won’t even mind if you lose or break them since they were free!

I have accumulated a nice collection of containers in various shapes and sizes that can accommodate a wide array of needs just by doing something I do anyway–eat.

So the next time you decide to order in, be sure to toss the containers in the dishwasher so you can use them for future needs.

Restaurants also can provide great things like coasters and glasses, especially special edition beer steins, tumblers, and such which are sometimes just given away to customers.

There have been numerous mentions of people reusing plastic zipper bags.

That is just cheap, not to mention unsanitary.

It’s one thing to reuse the bags for storing packaged goods, but something totally different when talking about putting food directly in them, then washing the bags to prepare them for the next use.

For one, it’s a health risk.

There is a reason why food and health experts advise against using plastic cutting boards for raw meats, fish, and poultry–they do not get 100% clean even in a dishwasher.

Is it really worth the health risk to save a few pennies?

Then there are people who stock their cupboards with sugar packets, napkins, toothpicks, etc by stuffing their pockets or pocketbooks with these items off of restaurant tables and bar tops.

But that’s a whole different story…

There is nothing wrong with not giving a crap about the image others may have of you based on your vehicle.

I can say this because I don’t put high importance on mine.

In fact, I hate the idea of cars as status symbols.

Most items aren’t even all that useful, such as a sunroof, spoiler, chrome rims, or other aesthetic accents.

They are mostly just for show, adding very little (if any) performance value.

Trust me, I know from my own experiences in my 20’s!

Buying used is a good way to keep your initial out-of-pocket expenses to a minimum.

So is buying new but without all of the high-end factory-loaded options or at the end of the model year.

Driving your car for as long as you can until the repairs no longer justify the costs is also an option, although to me that borders on being cheap due to the hassles presented by doing so.

Now, on the opposite end of the spectrum are the manics who really neglect their cars for the sake of saving money.

Driving around with cracked windshields, doors, and trunks that are held closed by ropes or zip ties, dragging exhaust, roof lining that sags to the driver’s head (or lower), etc goes way beyond frugal.

There is a significant difference between not placing high importance on one’s car and coming off as if you don’t take care of your possessions.

It’s important to understand the distinction between this fact and the use of a car as an image enhancer, though.

Additionally, as cars age, they lose performance which also leads to a loss of fuel economy which is anti-frugal.

Not to mention the fact that not properly caring for a vehicle not only presents a danger to the people inside it, but also to those on the outside.

The cost of heating and cooling your home is one of the biggest living expenses a household has to worry about.

It doesn’t matter if it’s gas or electric, energy consumption is a big deal.

Depending on the location, energy costs can take huge swings as the seasons change, and keeping things manageable takes a little bit of effort and dedication.

These days many electronic items are EnergyStar compliant, so choosing such items helps a little bit.

Using power strips to centralize power control and turning off unnecessary devices at night or when leaving the house makes a lot of sense, and can save additional money.

So can using digital thermostats to automatically regulate the interior temperature so as to not waste energy when no one is home saves quite a bit more than the other ideas.

Even signing up for your local power company’s power-saving program is a normal way to save some money.

Having a “home” is supposed to be about having a space to live within which you are comfortable and which reflects you as a person.

The comfort factor is where the cheapness comes into this equation.

I cannot believe that some people actually do this, but I have heard of people who go quite far in an effort to keep energy costs down.

Rather than running the heat in the winter months, there are some people who absolutely refuse to do so, instead choosing to layer their clothing.

I’ve even heard of people wearing jackets and heavy sweaters indoors in order to not use any additional energy.

To be clear, these people are making the conscious decision not because they are cold, but because they don’t view the energy cost as being “worthwhile”.

How can that possibly be comfortable, and how can someone possibly be so cheap as to choose to wear multiple layers indoors overrunning the heat, and walking around comfortably inside of their own home?

Possibly one of the most budget-unfriendly expenses for sure, but something that is necessary (at least according to normal, socially-adjusted people).

This is perhaps one of the easiest areas to save a buck or two without going cheap and isolating yourself from friends, family, and coworkers.

There are tons of ways to save money while still being able to experience social and cultural activities.

One of the best ways is to set aside a little bit of money in predetermined intervals like a slush fund in order to pay for such things.

Coupon magazines like The Clipper and Sharp Saver, websites such as restaurant.com, and LivingSocial, and signing up for email promotions like free birthday meals all offer ways of saving money without hiding out in your home like a hermit all of the time.

Even though you “shouldn’t use them” (according to some people) in the beginning, coupons can save money on dates!

Saying no time and time again when people want you to go out with them gets old, and after a while, they will simply stop asking.

There have even been suggestions out there that people should cut out those who have different spending habits from your life.

That is the ultimate in cheapness–judging people based on spending habits regardless of the quality of their company and your history together.

There are only so many places and events that be attended and taken in without spending a single penny, and doing the same thing over and over without experiencing anything new is not living life, it’s more like surviving until you die.

Of course, there are a number of areas that people can blow completely by frugality and venture deep into cheap territory, but these are some of the most obvious and ridiculous things I have seen and heard about.

Everyone has to figure out what works best for them, and not let others dictate how they should live their lives–not parents or neighbors or coworkers, or especially a stranger online like me!?

What are your thoughts on the frugal/cheap debate? Do you believe there’s a distinction? Do you even care lol?